Building a pool at an apartment complex or hotel is about more than just checking off a box, it’s about creating a unique space that contributes to the larger experience of the building.

Or so says managing director at Bozzuto Development Co., Jeff Kayce, who has played a significant role in creating some of Baltimore’s newest, luxury developments — many of which include pools.

Take a look at some of the new luxury pools across the city in the slideshow at the top of this page.

With summer now in full swing, city residents are clamoring to find a way into the city’s new, high-end pools — despite high costs of memberships, day passes or rent at some apartment complexes.

So, what makes it worth the cost? What is the value of a well-designed pool?

At Bozzuto Group, Kayce said pools are an important part of the experience the real estate company is trying to deliver at developments like Anthem House, Union Wharf Apartments and the upcoming Liberty Harbor East. Many of their new mixed-use projects are based on the hotels of South Beach in Miami where pools and amenity spaces are used as the central element.

“We are always trying to weave together an impressive progression with the pool or courtyard as the unifying element, or sometimes the most powerful moment at the end of that procession,” Kayce said.

It’s a trend he said began with the Fitzgerald at UB Midtown, where the pool is immediately visible upon entering the mixed-use building, and amenity spaces are stitched around it.

The concept is expanded on at Union Wharf, where Kayce said the infinity pool offers views of the water beyond while still remaining wrapped in amenities. It’s one of the elements that drove the value of the apartments there which rent for between $1,824 and $2,796.

Pools are so important to the Bozzuto design, they do not drain them during the offseason. They are always “full and visually appealing” for residents, Kayce said.

To deliver a unique experience, and not just what Kayce calls a “commodity product,” pools must be thoughtfully designed. High material costs are also considered, he said, so decisions are made carefully.

“Typically we have found the incremental cost of a well-designed pool makes up for itself in the marketability of the project and also the resulting rents that go along with it,” Kayce said.

Hotels and swim clubs around the city have also found that residents are willing to pay for a high-end swimming experience.

The Sagamore Pendry Baltimore hotel opened up its pool to non-hotel guests for the first time this summer. The $3,500 season pass gets you and one guest weekday access to the Pendry’s pool and fitness center, though weekends will still be reserved for hotel guests.

Only a limited number of memberships are available to start. General manager at the hotel David Hoffman couldn’t share the exact number of members the pool has so far, but he said the number is in the low teens.

“We are seeing great activity at the pool this summer,” Hoffman said.

In Canton, two new swim clubs have grabbed the attention of the community.

Scott Plank’s War Horse Cities LLC recently opened Swim Club at Lighthouse Point, touted by the company as “an urban resort” on the “glittering waterfront.” It’s located on the swath of land recently acquired by the development company for more than $22.5 million. It cost $500,000 to renovate the former Baltimore Marine Center Pool.

Next door, the $20 million expansion of the Merritt Clubs gym brought another new pool online for its 7,000 members.

The rooftop pool has three places to get wet — an adults-only pool, kids pool and hot tub.

This article was originally published in the Baltimore Business Journals on July 12, 2018. See it in its original post here. 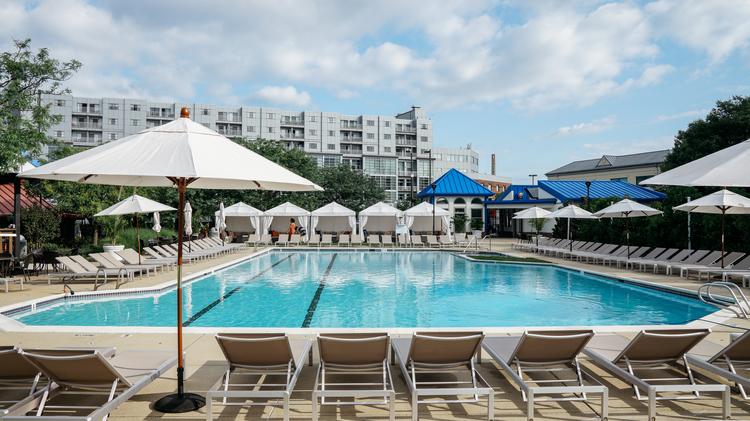