More than 200 people filled the hotel’s grand ballroom for late morning speeches, and then dignitaries moved out to the street to cut a red ribbon and open the doors.

One principal who was conspicuous by his absence was Under Armour CEO Kevin Plank, whose Sagamore real estate arm led the development team.

Colleagues said he had a work-related schedule conflict that prevented his attendance. “He has a day job,” quipped designer Patrick Sutton.

Scott Plank said the team didn’t set out just to build something good for the local community.

Guests had a chance to walk around the three-level hotel and see many of the public spaces, including the Rec Pier Chop House, the Cannon Room whiskey bar, a pool overlooking Baltimore’s harbor, meeting rooms and an open-air courtyard featuring a 12-foot Botero horse sculpture. The restaurant, led by chef Andrew Carmellini of NoHo Hospitality Group, is scheduled to open March 25.

Hogan said he got a tour and is impressed.

“It’s a remarkable achievement for Baltimore and the state of Maryland,” he said. “This…will really be a showcase. It will breathe new life into this area.”

Pugh said she’s grateful for the 200 new jobs created by the hotel and the careful way the building has been preserved with oversight from the city’s preservation commission. “Thank you so much for choosing Baltimore and partnering with Under Armour,” she told Pendry executives.

Hoffman, the general manager, said he was transferred from a hotel in Hawaii and has come to like Baltimore’s brand of waterfront hospitality.

Sagamore Pendry Baltimore was developed as a collaboration between Montage International, the parent of the Pendry brand, and Plank’s Sagamore Development Company. It’s the second Pendry hotel, after one that opened in San Diego last month. Room rates start at around $330 per night on Kayak.

Alan Fuerstman, the founder, chairman and CEO of Montage International, said he and Kevin Plank are kindred spirits because both are passionate about their hometowns and aren’t afraid to challenge the leaders in their industries – the Ritz Carlton and the Four Seasons for Montage, and Nike and Adidas for Under Armour.

“We are thrilled to open our second Pendry hotel and first East Coast location for the brand in Baltimore with our partners, Kevin Plank and Sagamore Development Company,” he said. “While paying homage to the property’s rich heritage, Sagamore Pendry Baltimore brings new design and culinary offerings to Fell’s Point, coupled with the service culture that Montage International is known for.”

Sagamore Pendry Baltimore sits atop the 1914 Recreation Pier, once one of the country’s busiest points of entry for immigrants. The pier was renovated to honor the history of the property while incorporating a contemporary esthetic that would appeal to today’s travelers. Sutton, of Patrick Sutton Associates, and Beatty Harvey Coco led the design team. Whiting Turner was the construction manager.

The guest rooms and suites were designed to evoke the feeling of being in a captain’s berth on a ship, with rich mahogany cabinetry and nautical brass details. The roof at the center of the pier was removed to expose a landscaped courtyard featuring the Botero sculpture as its centerpiece. The common areas are filled with works of art inspired by Francis Scott Key and “The Star-Spangled Banner.”

Guests stayed in the hotel last night, and some Pendry employees stayed on the premises over the past few weeks as the hotel was coming together. But now, it’s official.

Baltimore “has always been a hub of culture and innovation, with a rich heritage rooted in commerce and travel,” Kevin Plank said in a statement prepared before the event. “It is with a commitment to historic preservation and a dedication to the unique architectural fabric of Baltimore that we open the doors of Sagamore Pendry to our diverse community and its visitors. Rec Pier will once again be a thriving economic and social center in Fells Point. We’re proud that Sagamore Pendry has created over 200 new jobs in Baltimore, and we will continue investing in our city, growing the local economy.”

This article was originally published in Baltimore Fishbowl on March 21, 2017. 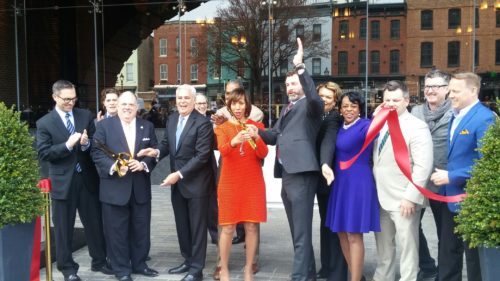