Updates From The Anthem House Development

Work on the Anthem House project at the northern corners of Lawrence St. and E. Fort Ave. in Riverside and Locust Point continues to progress as new retail spaces are being created. The Anthem House portfolio of properties is developed by Scott Plank’s War Horse Cities and partners.

Already completed is Anthem House, the $100-million apartment building at 900 E. Fort Ave. It features 292 apartments, 449 parking spaces, and 20,000 sq. ft. of ground floor retail. War Horse partnered with Bozzuto and Solstice Partners on this building which celebrated its grand opening in July 2017. The site was formerly a vacant lot that was once the home of GE and a small retail building that was demolished.

Restaurants Amber and Jazz & Soju, as well as fitness studio The Bar Method, opened in retail spaces along E. Fort Ave. in Anthem House last year. There remains one retail space available on E. Fort Ave. at the corner of Lawrence St.

Limoncello is building a 120-seat Italian restaurant on Lawerence St. that will have an outdoor patio looking out onto the Inner Harbor. While construction is underway, Jim Mills of War Horse said the restaurant is likely a few months out from opening.

A2 by Anthem House was built across the street at 1430 Lawrence St. at the site of a parking lot previously used by former diners Rallo’s and Big Matty’s Diner, which were located at 838 E. Fort Ave. Big Matty’s Diner relocated to Southside Marketplace and rebranded as Southside Diner. War Horse Cities partnered with Bozzuto on A2.

A2 is a five-story, 52-apartment unit building that was completed last year. It features a 1,300 sq. ft. first-floor retail space that includes tall ceilings and garage doors. A2 shares the amenities at Anthem House.

War Horse has started renovating the former Rallo’s/Big Matty’s Diner in preparation for a future restaurant. The former Thornton’s Pub liquor license was transferred to 838 E. Fort Ave. in 2015 as Thornton’s was converted into a Locust Point residence. The 4,064 sq. ft., two-story building at 838 E. Fort Ave. could be laid out as a two-story restaurant. It will have a back patio in the former parking pad behind the building.

Mills said there are many conversations with prospective tenants in regards to the collective three available retail spaces, but nothing to announce at this time.

In its acquisition of 838 E. Fort Ave., War Horse also acquired two adjacent rowhomes at 834 E. Fort Ave. and 832 E. Fort Ave. Both homes were renovated in recent months with finished basements, parking pads, and second-story decks. War Horse had initially intended to rent these homes as part of the Anthem House community of amenities, but will instead put them on the market for sale in the near future.

This article was originally published in South BMORE on February 6, 2019. See it in its original post here. 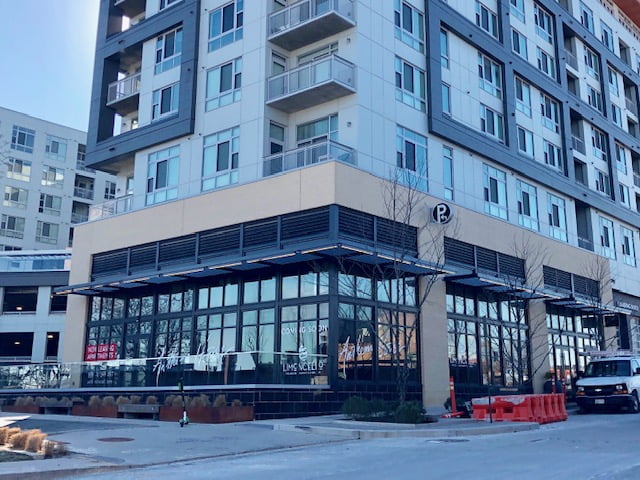