In the race to distribute Covid-19 vaccines, countries need to come up with effective plans to reach people in both bustling metropolitan cities and rural areas with less health care investment. Right here in the United States, states such as Illinois, Michigan and Alabama have enlisted the help of their National Guards to provide vaccinations in rural counties.

A potential solution to minimize disparities could be right above our heads—literally. The San Francisco-based company Zipline, founded in 2014, recently began delivering Oxford-AstraZeneca’s Covid-19 vaccine doses using autonomous drones, as part of the COVAX initiative, a project working to expedite production and equitable worldwide access to coronavirus vaccines, as well as tests and treatments. Operations have already begun in Ghana, where Zipline has four distribution centers and plans to disseminate 2.5 million doses over the next year, and are soon to start in Zipline’s other markets of the United States and Rwanda. Deliveries in Nigeria are planned for later this year.

Zipline designs and manufactures its own fleet of small, airplane-like drones. Each drone can carry nearly four pounds of payload and autonomously fly itself more than 50 miles from one of the company’s distribution centers. In the company’s seven-year history, Zipline’s drones have made over 115,000 commercial deliveries, sending everything from personal protective equipment to blood, to cancer-treating drugs, with around 20 to 30 percent of those trips carrying critical, life-saving products. On the first day of delivering Covid-19 vaccines in Ghana, they sent 4,500 does in 36 deliveries.

Zipline designs and manufactures its own fleet of small, airplane-like drones. (Zipline)
The drones launch after orders are placed and contain items either packaged by staff at the base or pre-packaged by clients. They cruise at speeds of over 60 miles per hour and parachute items safely to the ground by factoring in the wind. The aircraft then return to Zipline’s distribution centers, which can serve millions of people across more than 8,500 square miles. The company currently operates seven distribution centers and plans to add many more by the end of 2021.

Keller Rinaudo, Zipline’s CEO, says that the pandemic has shown that telepresence is set to become a major factor of American health systems, and that the company’s drone deliveries can play an important role in a remote network.

“A lot of the most innovative hospital systems are realizing that the future of health care is decentralized to a certain degree,” says Rinaudo, who has a background in genomics and software engineering. “Patients are beginning to act more like consumers. They want convenience, and they want [health care] to come to their home if at all possible.”

Each drone can carry nearly four pounds of payload and autonomously fly itself more than 50 miles from one of the company’s distribution centers. (Zipline)

Drones could soon be a major presence in both private and public life. The global market for drone services—everything from product delivery to aerial photography, mapping, environmental monitoring and storm tracking—is expected to reach $63.6 billion by 2025, up from $4.4 billion in 2018.

In December, the Federal Aviation Administration (FAA), referring to drones as the fastest-growing segment in the transportation sector, announced new regulations to drone usage that take effect later this month. The rules require drones with FAA registration to also have remote identification, so that they can be identified in the airspace, as well as outline the conditions under which drones can be flown commercially above people and at night.

The regulations create standards for companies like Amazon and UPS, which are already testing unmanned aircraft for consumer deliveries, and make the possibility of common drone deliveries more realizable in the U.S. The FAA also stated that about 1.7 million drones had been registered in the country, with over 200,000 certified remote pilots.

The drones cruise at speeds of over 60 miles per hour and parachute items safely to the ground (Zipline)
Rinaudo’s Zipline isn’t the only company looking to innovate the health sector using drone technology. The Maryland-based firms MediGO and MissionGO seek to optimize the organ transplant process through drone delivery. MediGO is led by co-founders Scott Plank and Joseph Scalea, while MissionGO is led by Plank and company president Tony Pucciarella.

Reducing the amount of time an organ is without blood supply means its tissues are better preserved. Drone flights themselves, in which the organ’s properties such as temperature and pressure are monitored, may actually be safer than usual aircraft transport.

MediGO is focused on the logistics of organ transport, examining how to establish an informed and transparent process from when an organ procurement organization sends out an organ to when transplant centers receive it. It also works to understand which modes of transport are best for various types of organ deliveries, and has so far been involved in hundreds of deliveries, according to Scalea.

“There’s a lot of friction in the system that exists between the donor and the recipient, and MediGO is going to reduce that with communication, data and transparency,” says Scalea, who is a transplant surgeon at the University of Maryland Medical Center. “We have translated the science and commercialized that into services that can really help human beings get better access to higher quality work.”

MissionGO, which operates as MediGO’s sister company, develops and operates the technology that is used for drone-based organ deliveries. The company works with localities and the FAA to provide safe and effective flights. Plank, who has worked in logistics and resource management, believes that electric unmanned aircraft will define the future of delivery.

“I think a couple of years from now, we’re all going to sit back and kind of laugh at each other that we used to use a 3,000-pound aircraft with 600 pounds of aviation fuel and two pilots to move a 10-pound box,” says Plank.

On the first day of delivering Covid-19 vaccines in Ghana, Zipline drones sent 4,500 does in 36 deliveries. (Zipline)
As the coronavirus pandemic enters its second year, Zipline is looking to play a significant role in Covid-19 vaccine distribution and health equity. The company, which regularly serves 25 million people and more than 3,000 hospitals and health facilities, drastically increased deliveries of non-Covid vaccines at the start of the pandemic. Usual health care operations, including immunizations, were interrupted by country quarantine orders that stopped on-the-ground supply deliveries to health facilities, leading to Zipline’s expanded role.

According to Zipline, its drone deliveries complement truck transport, and can reduce contact risks by delivering necessary medication both to nearby clinics and directly to consumers. The drones also send critical supplies right when they are needed, with centers able to complete hundreds of deliveries daily. Rinaudo says that Zipline’s system is able to improve access to health care while reducing costs from waste, a balance that is difficult to achieve.

“We save governments millions of dollars by just enabling them to not throw out things like blood or other really expensive, crucial medical products,” he says.

Zipline has seven distribution centers, four of which are in Ghana. The company’s drone deliveries complement truck transport. (Zipline)
A focus of Zipline’s is to target locations beyond major cities that have more limited access to vital medical resources. In Rwanda and Ghana, since 2016 and 2019 respectively, the company has sent medical supplies from distribution centers to rural clinics. In Rwanda, about 75 percent of blood delivered outside of the capital of Kigali is done through Zipline. Last April, during the early stages of the pandemic, Zipline began transporting Covid-19 test samples from rural Ghanaian areas to major cities. More recently this past February, the company began 24-hour product delivery service to Rwandan hospitals.

When it comes to stopping the global spread of coronavirus through vaccines, Rinaudo believes more work needs to be done to ensure equitable access of doses for all communities. The COVAX initiative, with which Zipline has partnered in Ghana, plans to provide vaccines for up to 20 percent of eligible participating countries’ populations.

Zipline plans to distribute 2.5 million doses of Covid-19 vaccines in Ghana over the next year. (Zipline)
“The sad thing is, I think very little effort or attention has been paid to how we’re going to do distribution in an equitable way,” says Rinaudo. “If only rich people or only people who live in cities are the ones to get vaccinated, this is a very bad outcome—and we’re in danger of this in every country on Earth, including in the U.S.”

Last year, Zipline began American deliveries with a smaller scope. The company partnered with health care network Novant Health to establish a route in North Carolina delivering personal protective equipment (PPE) from Novant’s logistics center to one of its clinics more than 20 minutes away by car.

A focus of Zipline’s is to target locations beyond major cities that have more limited access to vital medical resources. (Zipline)
The plan went through after the FAA waived certain regulations on drone usage for Novant. In this case, it lifted rules on drones that prohibit them from being flown in routes beyond line of sight, without observers and above the general public. This made the route the country’s first beyond-line-of-sight autonomous drone delivery in controlled airspace.

Strict regulations make Zipline’s work much harder to get off the ground in the U.S. compared to Ghana and Rwanda. But Zipline’s plan to deliver Covid-19 vaccines in America suggests that medical drone delivery could become a major force in the health sector, not just in North Carolina but throughout the country. Rural American communities could have much to gain from quick transport of crucial medical resources.

Scalea, who notes that he envisions his work in organ transport evolving to include other types of products, says that the contactless quality of medical drone deliveries is not only important now but will continue to be valuable for post-pandemic health care operations.

Plank praises Zipline’s efforts sending resources throughout African countries, while reflecting on his own companies’ extensive involvement throughout organ delivery.

“Zipline is doing incredible work in Africa, in a critical area where there is so many impediments to travel and transportation,” says Plank. “The work that MissionGO and MediGO are doing combined is recognizing that all distribution is a multimodal transportation network, and that [an] unmanned aircraft system may be the first or the last mile, but really it’s about the entire transportation system.”

Zipline regularly serves 25 million people and more than 3,000 hospitals and health facilities. (Zipline)
Zipline is also working with Walmart to deliver health and wellness products to Americans, with trials taking place early this year near the corporation’s headquarters in Arkansas. According to a Walmart press release, the carbon emissions-free service could also expand into general merchandise, aligning with goals of commercial businesses to utilize drone delivery.

Zipline also plans to place ultra-cold freezers at each of their distribution centers. This decision provides ultra-cold chain storage for partnering clinics that may not have the capability to keep certain products. The freezers were originally intended to store the Pfizer vaccine, but the Food & Drug Administration has since allowed Pfizer vaccines to be preserved at higher, more conventional temperatures.

This article was originally published in Smithsonian Magazine. To read the original article, click here. 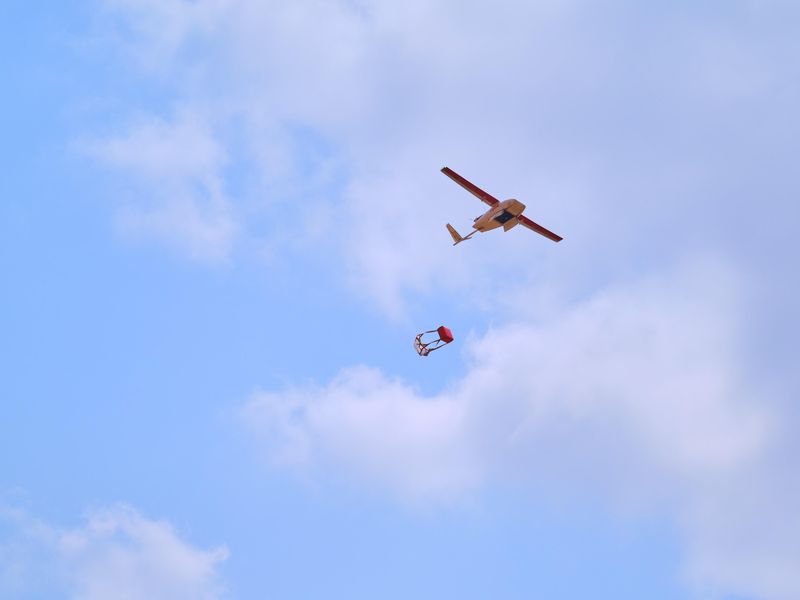