Scott Plank’s War Horse Cities has been an active developer in Baltimore, and recently the University of Maryland alumnus has begun working on a new project on the College Park campus in Prince George’s County.

War Horse, in partnership with Chesapeake Real Estate Group, signed WeWork for its first college campus coworking space in a building at 7761 Diamondback Drive, near the city’s new $180M hotel. It is also working on a property next door, branded as The Hall CP and designed as a gathering place for artists and entrepreneurs. Bisnow caught up with Plank, who will speak Sept. 13 at Bisnow’s Prince George’s County State of the Market, to talk about his College Park project and his overall thoughts on the area.

Bisnow: When did you first get involved in this College Park project?

Plank: We started talking to the university two or three years ago. The university asked me to come talk to them about what was then called the Innovation District. They asked me to talk about it because of my relationship with WeWork. I’m an early investor, I built out two buildings in New York and San Francisco and am an investor in the company. Secondly, because of our work in San Francisco developing a project called The Hall SF. It was a pop-up for two to three years while we were getting entitlements, and it was a fantastic project that brought together people from the tech community and the neighborhood. It was nominated for a ULI Global Excellence Award.

Bisnow: What in particular about this College Park location made you think the concept could be successful?

Plank: Basically, my partners at Chesapeake Real Estate Group and I have a relationship with WeWork, and we financed their second building in New York. I felt that we could get WeWork to come and that WeWork would also be, like a lot of other startups, interested in what’s going to be there and how it’s going to be more than an office park. We pitched the concept of The Hall in San Francisco to WeWork and the university at the same time. The interesting thing is The Hall in San Francisco is right next to my WeWork building there. The WeWork in San Francisco is both a performing arts area, a convocation area, we’ve held nonprofit events, local music and local vendors. The university and WeWork were looking for the same thing in how do you create a community hub for this brand-new neighborhood.

Bisnow: What are the different components of the project you have planned?

Plank: What’s fun about it is we have a former office building that the university has leased to us to create a WeWork, which is a traditional WeWork but smaller. They have done 150K SF spaces, but this one is only 25K or 30K SF. It’s a small foothold and a test for WeWork and the university, which we hope both of them like and have great success, and we hope there will be more WeWork product coming.

The Hall CP is a different building next door that will create community and what we hope will be a town square. You have the first-level garage of the hotel is now startup space, you have WeWork as startup space and you have the hall. You’ve got this beautiful community housing more than 300 workers all right there and the staff of the hall and the activities of the hall. We hope we’re creating a place very authentically, because we’re not building a brand-new structured building, which a lot of the rest of the campus will be. We believe, and over history I found, what people really like is authenticity.

We’re investing in the WeWork building, which is similar to what they do in other places but smaller, and investing in the hall in an entrepreneurial way by giving people exactly what they need to do but nothing more. We’re not putting in marble floors and shiny countertops. We are putting in great quality food shops and coffee shops. Also, we have a performing arts space and meeting space enclosed. In the backyard I think we can throw some fun parties and tailgates.

Bisnow: What is The Hall CP going to look like?

Plank: It’s going to look a lot like it looks now. As you look at the building the right corner faces WeWork, that corner is where the café would be. It would be open at most times so members at WeWork know they have a place to hang out and have coffee, as well as other startups and companies in the first level of the hotel. Then we also will have a bar and eating space in the middle of the building and on the far left side is a very big open room that will be multipurpose. It’s a big room and it has rollup doors into the backyard. So the back of the space can be its own place.

In my experience, what artists and innovators look for is help when they need it, but not oversight. Having a beautiful backyard where WeWork can have a party, where the university can have events and classes at UMD who need more space or want a relaxed environment.

Bisnow: So when are the WeWork and the Hall CP expected to open?

Plank: We’re hoping to have everything open in the spring. I would say in the very early spring.

Bisnow: College Park is working on a major transformation of the area between Route 1 and the Metro station branded as the Discovery District, with $2B of planned public and private investment. What does WeWork choosing this site as the location for its first College Campus space say about the success of that initiative?

Plank: So the interesting thing about WeWork is the first building they did was about 40K SF in Manhattan, and I did their seventh or eighth, which was 60K SF. In their meteoric rise, now everybody’s throwing WeWorks at them. When you’re a growing business, it’s often not what you do, but what you don’t do. Getting WeWork comfortable that that UMD space will be profitable and worth their time was a big lift.

It had to do with Ken Ulman and the university selling WeWork that there’s a lot here. It had to do with myself and Chesapeake knowing what they want and being able to build economically the right product. It’s a huge additional brand for the Discovery District to have WeWork and their first [location] in a college campus. WeWork had been looking for that concept for a while and hadn’t found the right opportunity. They were aware colleges were a great idea but haven’t been able to find the magic triad between the right location, the right developer and the right university.

Bisnow: There is a lot more room for office space in the Discovery District, with at least 1.5M SF planned. Do you think having WeWork will help attract other companies to move to College Park?

Plank: Absolutely, especially because of what the university has done in placing the Iribe Center around the corner from the Discovery District. That is a tremendous anchor for a lot of reasons. [Oculus VR CEO] Brendan Iribe had lots of choices and decided he’d build this facility at UMD. The building is stunning. It’s huge, and I believe it will put UMD at the epicenter of the new technologies of augmented reality and virtual reality.

So I look at that as one of the first and most important pieces. When you add that with WeWork, which signifies an international brand, you’ve also got other companies that decided to put their innovation groups into the hotel, and with the Purple Line coming, the value of that can’t be underestimated.

Plank will discuss these College Park projects Sept. 13 at Bisnow’s Prince George’s County State of the Market & Schmooze, held next door to his site at The Hotel at UMD.

This article was originally published in BizNow on August 7, 2018. See it in its original post here. 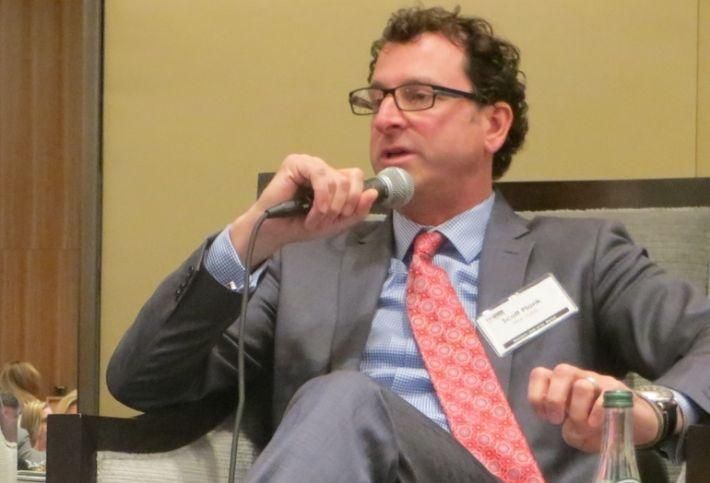