Deliveries are challenging on remote parts of the Navajo Nation due to the lack of road infrastructure and transportation. Although official agencies and mutual aid groups continue their efforts to distribute the necessities during this global pandemic, not everyone has had access all the time, creating uncertainty for many.

Drones may be part of the solution in getting food, medicine and supplies to those who live in the most remote parts of the Navajo Nation during this yearslong global pandemic.

Mark Atlan is the CEO of a company called ZappCare, which is proposing telehealth, mobile health care units and drone deliveries on the Navajo Nation.

“This opens the door to get elders and others the medication or supplies they need, especially during harsh weather when they can’t get out of their driveway or live on an unpaved road,” Atlan said. 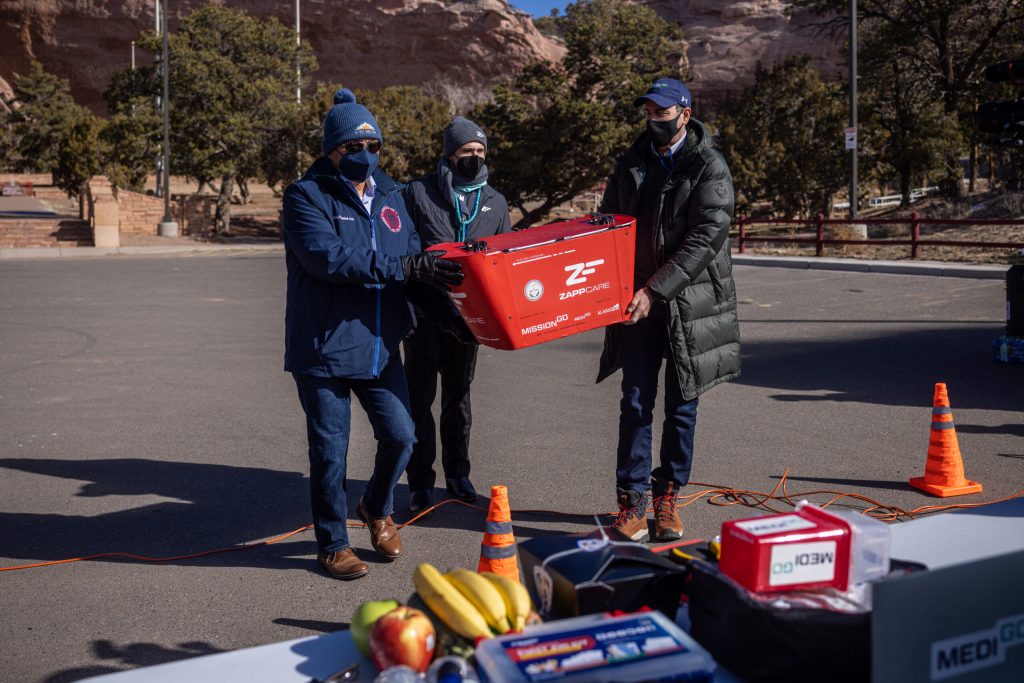 He spoke at a demo on Jan. 22 — a cold and windy day, but the sun was shining bright, illuminating a blue MissionGo drone as it hovered with the Window Rock in its backdrop. The drone carried an orange box filled with various medicines, demonstrating how one day, this type of aircraft could possibly be the solution to helping elders and others living in rural parts of the Navajo Nation receive vital prescriptions and other items.

Drones, or “unmanned and remotely piloted aircraft,” can carry medical necessities to those who need it the most but are having a difficult time traveling to health care facilities to receive it, Atlan said.

He is originally from Gallup, N.M., and is a member of the Chiricahua Apache Nation.

Atlan said the company was created in direct response to the pandemic and how hard the coronavirus hit the Navajo Nation.

“We asked ourselves the question why Native Americans, specifically the Navajo Nation, were hit so hard, and focused on developing a solution.”

“If we can transport the dire medication our people need, or even give them the resources they don’t have, it would save many lives,” she said.

Because of the pandemic, the Navajo Nation Fair and the Miss Navajo competition were canceled, and Parrish agreed to hold the title for an extra year. During her two-year reign, Parrish visited all 110 chapter communities to register people to vote and also to distribute donations alongside the Navajo Nation President’s Office.

“The whole purpose of bringing this resource to our people is to make sure people way out in places like Navajo Mountain get their medication they need,” she said, “because it takes two hours for an ambulance to get there.” 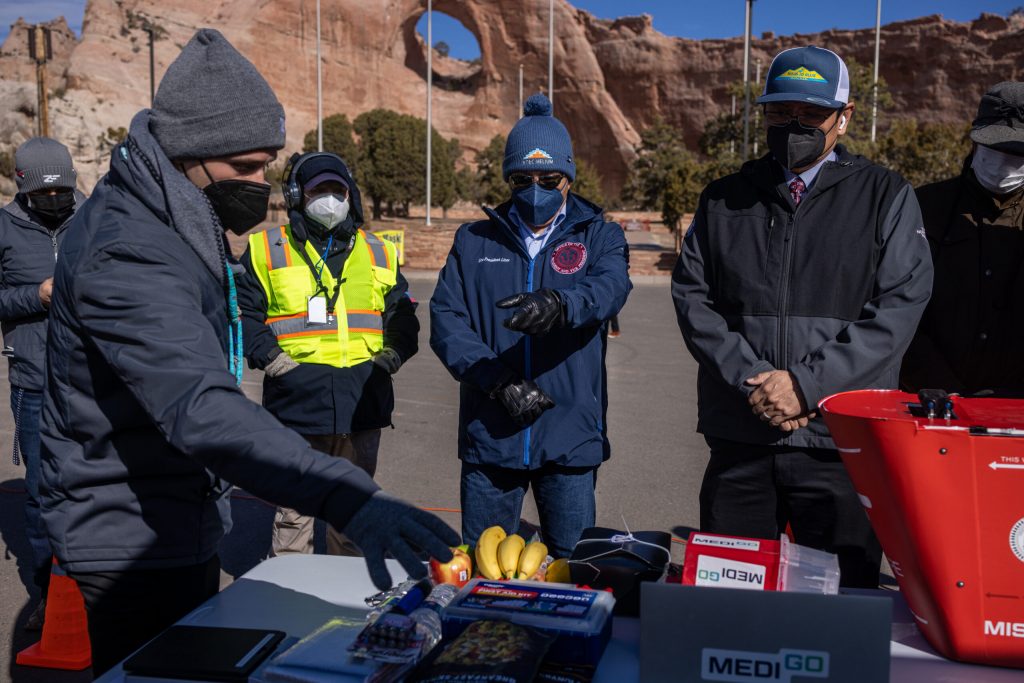 Atlan’s company was founded by individuals who are members of Navajo, Apache, Pauma Band of Luiseño and Cado tribes.

“ZappCare’s vision is to extend the lives of Navajo citizens by providing immediate access to safe, equitable, mobile and digital health care solutions,” Atlan said. “We also want to support the IHS with non-emergencies, to reduce wait times and access, so IHS can focus on emergencies and specialties.”

Atlan met Scott Plank, founder of MissionGo, a year ago. Through conversation, they were able to establish a partnership, where MissionGo would supply the aircraft and pilots.

“He told me about the challenges of the community the size of West Virginia with limited roads, weather challenges, long distances and limited fuel stations,” Plank said. “We immediately brainstormed with our teams about this demo and this idea.” 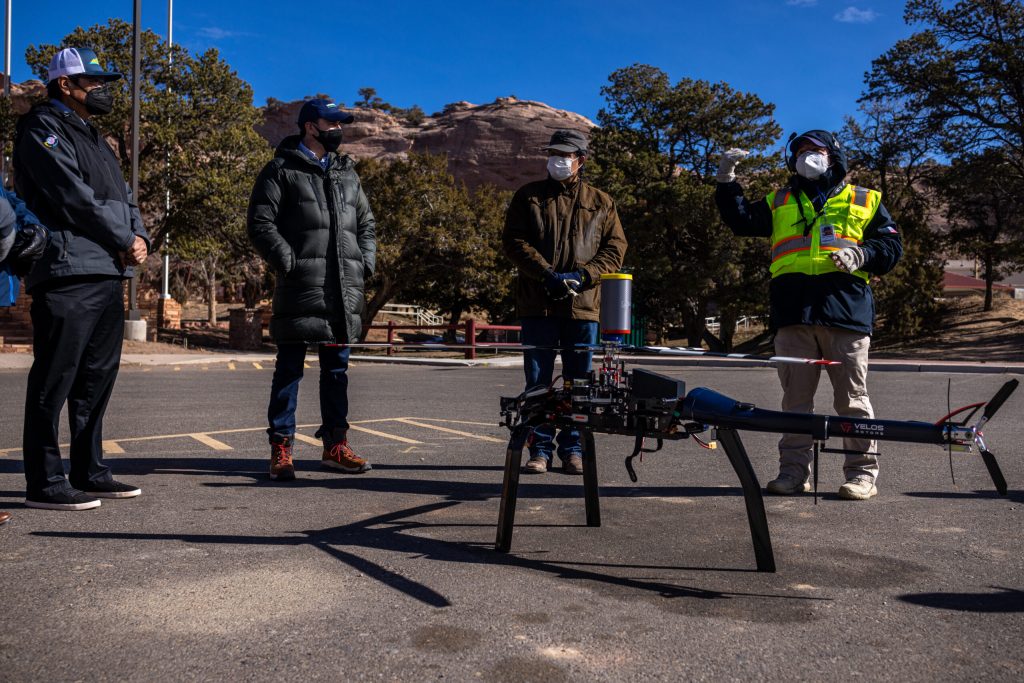 They displayed three different types of drones during the demo. The cost to make each kind, Plank said, is something they don’t talk about.

Functionality wise, the drone takes very limited input from a human pilot, because it has an autopilot on board. One of the drones can carry up to 15 pounds. Once fully equipped, it can weigh as much as 55 pounds. Before the take off, a flight plan is programmed, which is initiated by a pilot.

“The aircraft takes care of the rest, all the way from the take off, flight and landing,” said pilot Ryan Henderson. “The range the aircraft is capable of is anywhere up to about 40 miles.”

So, how would this mission actually work? Atlan gave a possible plan: Patients would see a doctor through the ZappCare App (seeking eyecare, urgent care, cardiology, etc.). The doctor would prescribe the correct medication. OneCare pharmacy would then fill the prescription, load it onto a large drone, fly it to one of the various sorting facilities, transfer it to a smaller drone and deliver it directly to the patient. 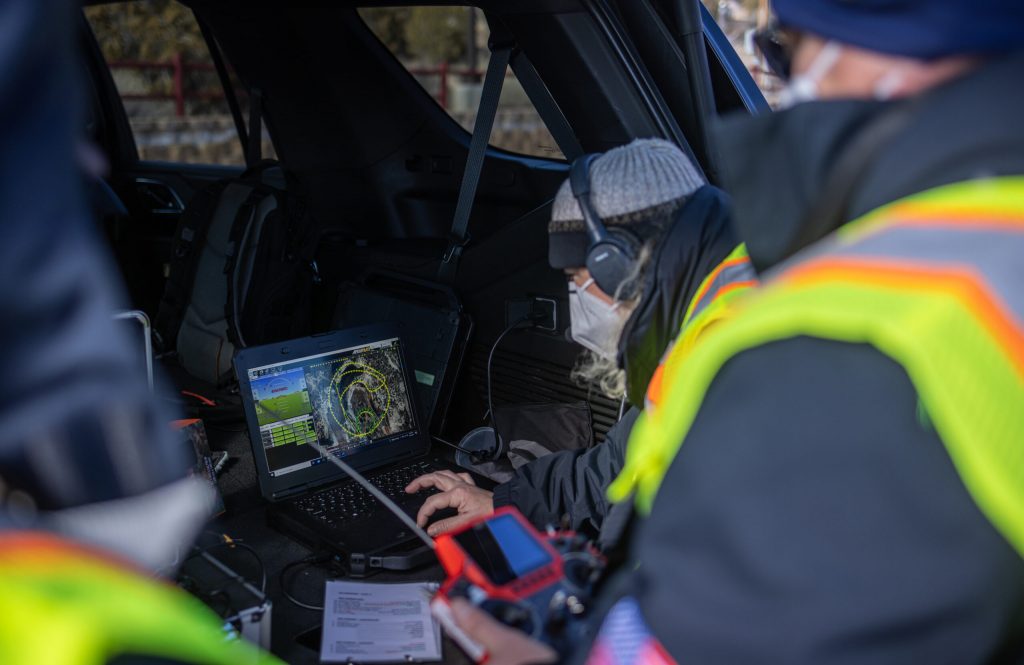 Indian Health Services or a 638 outpatient health care facility operated by Tribes or Tribal organizations would coordinate with the sorting facilities.

Drones could also be used for delivering food, emergency kits, and even on search and rescue missions.

“We want to work with all 110-chapter houses on how drones can serve their specific area and people,” Atlan said. “All areas of the Navajo Nation are different and therefore require different needs.”

He said this is also an economic development opportunity and job creator, which he discussed with JT Willie, director for Navajo Economic Development. During the demo, Atlan mentioned that for the past 15 months he had worked with Navajo Nation Vice President Myron Lizer and staffer Adam Begay to get the project moving.

“When COVID-19 first appeared on the Navajo Nation in March 2020, it influenced how health care operates on many levels,” Begay said. This increased the need for telehealth care, he said, and the Nation has been weighing delivery drones, especially for deep, rural locations. 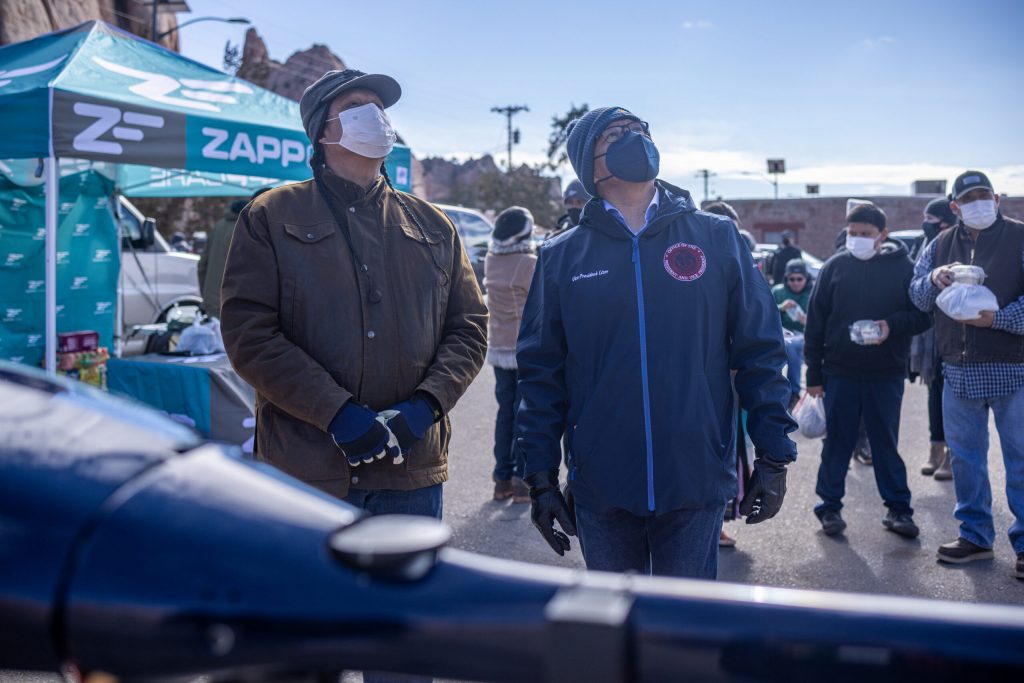 The Navajo Nation will need to consider options to fund the ZappCare drone delivery program for it to launch and expand on Navajo. Funding towards the drone program will support the drone efforts of delivery services, but it will also fund economic development on Navajo, Lizer said.

Begay said allowing drones to deliver goods and medicine will assist in combating both the pandemic and an unknown future. While hospitals on the Nation are providing limited services due to pandemic overwhelm, this drone endeavor could step up and provide telehealth to elders without transportation or families in quarantine.

The company also spoke with Dr. Jill Jim, director of Navajo Department of Health. Although the Navajo Nation Council did not attend the demonstration though delegates were invited, ZappCare did previously meet with Speaker Seth Damon and various Council members, where most feedback was positive, Atlan said.

Similar efforts in Rwanda have proved that drone delivery of medications and even blood has been successful. The California-based company Zipline has been doing these types of delivery since 2016. In October, the company celebrated over 200,000 commercial deliveries.

Donovan Pete, from Smith Lake, N.M., said the idea of this drone delivery is an interesting concept because of the opportunities that it does open. He said there’s a way that the drones can make GIS mapping a bit easy because the machines will be responsible for mapping out certain parts of the Navajo Nation. 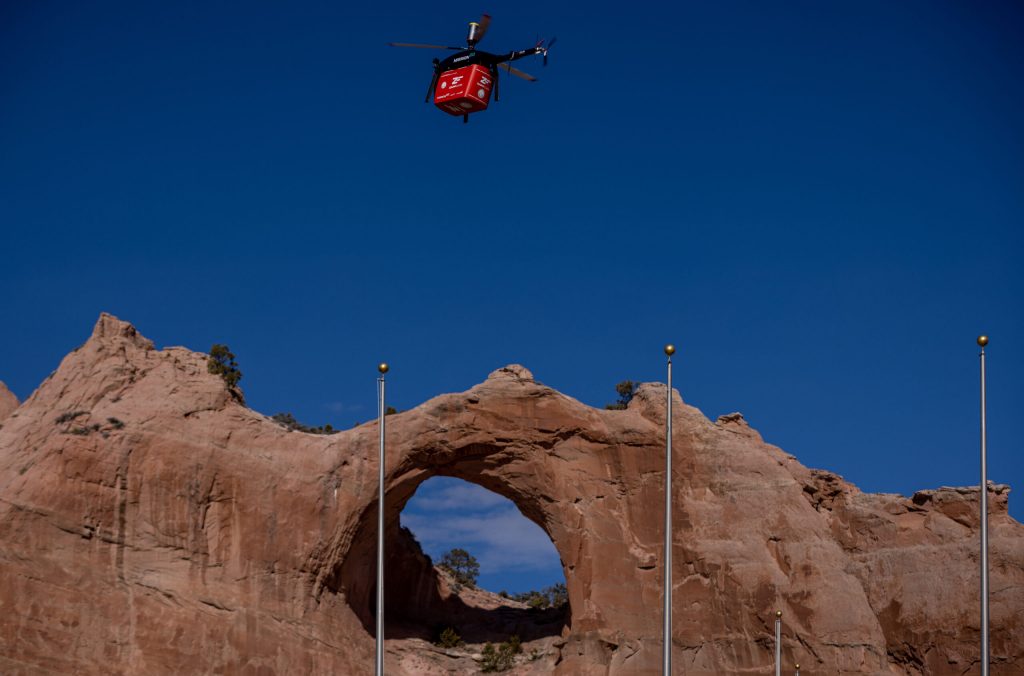 “The ease of delivering medicines and essentials will be vital, since some families and elderly are left without vehicles, and the community health representatives can barely make their rounds as they might have a few chapters under their belt,” Pete said.

But seeing the opportunities of the project, Pete can also see the other side as well, such as that some might view it as a waste, especially when items drones can deliver are limited, and some people may need more than their prescriptions.

“I know the cost can add up to service, and since there are not many members of the Navajo Nation that can do the service, much of the work has to be outsourced,” said Pete. “No one has a 3D printer to create parts for the drones too.”

This article was originally published on Source New Mexico. To read the original article in full, click here. 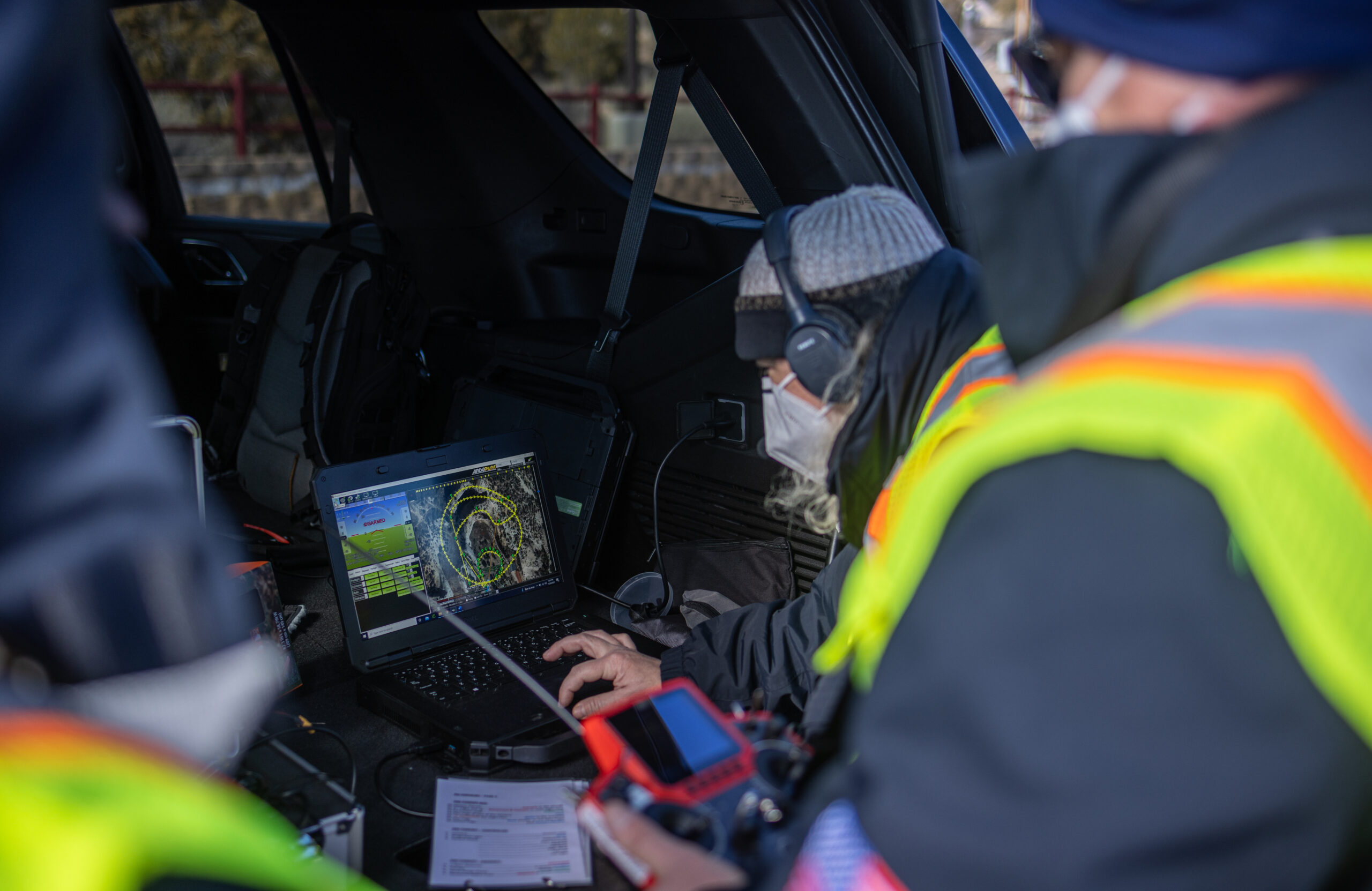