Leaders of the Navajo Nation are in discussions with a Maryland based company to use drone technology to improve health care for people around the vast reservation.

Whether it’s Window Rock, Kayenta, Crownpoint or Aneth Utah, getting critical medical cargo to residents is important. And what better way to do that around the 27,000-square mile area in Arizona, New Mexico and Utah than by unmanned aircraft flights.

“Thank you very much,” said Navajo Nation President Jonathan Nez. “This is an important demonstration and one that can provide fast medical supply delivery and lead to job creation on the Navajo Nation.”

The roughly two-hour agenda Jan. 22, which took place just outside the Office of the President and Vice President included two flights, one drone delivery with items such as insulin, hypertension medicine, protein powder and anti-venom, and a second flight with fresh food.

The event was open to the public and also included brief traditional ceremonies and a dedication to the Navajo Code Talkers — the 400-plus Navajo Marines who provided a special encrypted linguistic code in America’s victory over Japan in World War II.

Nez and Lizer were on hand, as were Gallup-raised and Gallup High School grad Mark Atlan, the CEO of ZappCare, a New York-based startup innovations and technology development company focused on bridging the gap between immediate access to healthcare and rural Native American tribes, and other special guests.

“This is something very much needed on the Navajo Nation,” the Chiricahua Apache-born Atlan said. “We look forward to working with the relevant parties to see this endeavor through. Safety and health are number one at the end of the day.”

The drones are roughly the size of a small picnic table and are manned by pilots.

They are equipped to carry small boxes of supplies. They take off and land like helicopters. Blood and other medical samples can be stored in small components in the body of the aircraft.

Nez said it’s a first-time remote drone delivery medical effort for the Navajo Nation. Ultimately, the plan is to deliver the proper medications in a timely manner, he said.

Plank said he’ll be in talks with Nez to finalize a decision on the next steps in the effort. It wasn’t immediate known if the matter must be approved by the full council of the tribe.

Plank added: “We love that the community was coming up with ideas for use based on the environment such as weather, deficient roads and utility services, and giving Navajo first responders another tool for finding lost livestock and even people.”

This article was originally published on Navajo-Hopi Observer. To read the original article in full, click here. 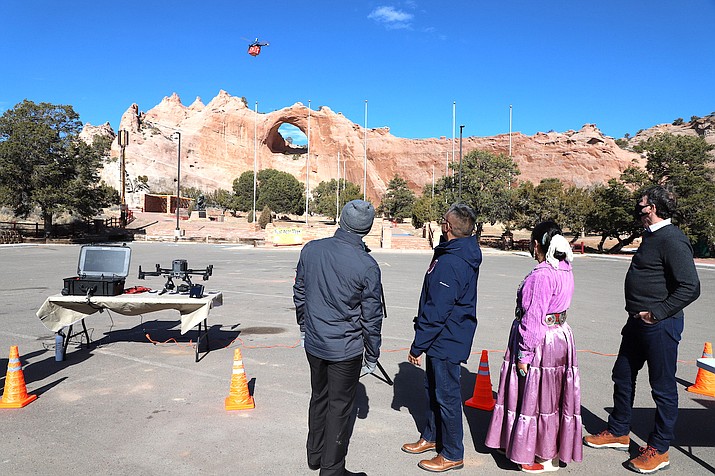