Scott Plank, the future of Hollins Market and Southwest Baltimore

Is Southwest the next neighborhood in Baltimore to prosper? Washington Boulevard looks better than it has in many years, the La Cite development is sprouting, the largest new residential development west of the Martin Luther King Boulevard  since the redevelopment of Lexington Terrace and the UM Biotech is adding building after building. Bill Struever’s Cross Street Partners  is active in the area with the renovated Lions Brothers former livery stable, now a 38,000 sf fully leased office building. As it is typical for any area on the verge of a breakthrough, there are those who are delighted and those who are concerned.
Scott Plank of Warhorse Development has bet a lot of chips on the Southwest with his agreement with Baltimore City to operate the Hollins Market for 15 years and with his investments in the surrounding area. The City would maintain ownership of the market.

If someone white and with the name Plank comes into the area, the camps of delight and concern split even more than they may already split traditionally. Plank moves right into the space of the tragic American race relations for which Baltimore has become an epicenter. To some such investment in vulnerable neighborhoods is the response that many had hoped for after the 2015 unrest. To others, wealthy developers swooping into communities of color is alarming. There is little that bridges those two views.

In Hollins Market those race relations had manifest themselves in the past as tension between  between the merchants and communities along Baltimore Street and north of it and the artsy types hanging out around the Hollins Market. The Sowebo Festival, 35 years old and thriving, is a wonderfully diverse annual affair which unites the communities once a year. The Hollins Market area has seen its ups and downs over the years. Always almost “getting there”, meaning a place where there is some vibrancy with restaurants, galleries and event spaces and not too many vacants and then slipping again. One of those downward slides happened when Gypsi’s Cafe collapsed during a careless renovation with dishes, silverware and commercial kitchen all condemned and being bulldozed before anything could be retrieved. That was one of those moments when one had to wonder if the City really care about revitalization. But that is long ago.

Southeast Baltimore, i.e. the communities of  Barre Circle, Franklin Square, Hollins Roundhouse, Mount Clare, Pigtown, Poppleton, and Union Square have since made great strides towards a unified approach with the creation of the Southwest Partnership which created in 2015 a community vision plan.

Hollins Market and District Hollins Market is the oldest existing public market building in Baltimore and the Market and the surrounding commercial district have the potential to again be a social and economic hub for the community. The Market and existing businesses in the district currently provide residents with accessible food, services, and community space. Increasing walkability, commercial activity, and density and maintaining and restoring the historic character of the Market will restore them to a major economic, nutritional, and social asset.

Scott Plank is on the long journey of building trust in disenfranchised communities. Last year he finished the remodeling of the Western Police District building in the heart of Sandtown as a community friendly and open facility, a truly tricky task, given the strained relations between police and community. Plank’s Hollins Market lease is no small commitment, but “it is much bigger than the market”, Scott Plank told me during a brief conversation about the project, referring to the “square” around the market and the questions surrounding the future of retail on Baltimore Street and the area overall. “Much bigger” also means about $6 million dollar already invested in the area in about 60 properties, rowhouses, retail and mixed use as Warhorse Cities CDC development director Jim Mills explains. Trust building includes retaining existing tenants in those rowhouses and assisting them with better lease terms where needed, Mills says. 15 market rate renovated and new dwelling units will be offered for sale shortly.

When asked about the always present concern of gentrification, Mills says that gentrification involves “developing/bringing something in the community that it doesn’t want” Mills states, while Warhorse is providing “a rejuvenated market which the community needs so desperately”. The company is also owns the Belvedere Square market near York Road and Northern Parkway which it began reviving in 2013 and operates a market in San Francisco. No doubt, conditions in Southwest Baltimore require a different approach. An earlier idea of beginning with sprucing up the square around the market has been tabled for lack of funds. Plank and Mills confirm that they are considering “pop-up” instlallations instead, at least on the north side of the market. The first phase of work will be now a renovation of the market shed. The head-house and the the second floor have to wait a bit longer until more funding is secured.

“Our projects are part of an overarching vision for the revitalization of the greater community” the Warhorse CDC states in some notes put together on occasion of a community meeting this week. “The historic Market is the epicenter of this project, connecting historic neighborhoods like Union Square and Pigtown with the University of Baltimore and 1,000 UMbio Park employees. Warhorse is also partnering with the local James McHenry Elementary and Middle school.

Aside from the complicated sensibilities of Baltimore the Warhorse investment in the Hollins Market relates to the future of Baltimore’s Markets altogether, almost all facilities are in play for major change without that any particular “proof of concept” had been tested and proven successful. Cross Street Market will be redeveloped and operated by Caves Valley which presented a new retro design in late December after Warhorse had dropped out of the partnership early in the process, anew approach was also recently announced for the Broadway Market in Fells Point. Across the country the market concept has gained new popularity as food hall, not really a concept, though which adequately addresses the food access and health issues of vulnerable communities in the Southwest. Beyond the future of public markets looms the entirely open question of the future of retail. Baltimore Street, once a thriving retail district still has largely vacant stores. How can the market square and the “Main Street” create synergy? What type retail would work? Certainly, the addition of large amounts of retail space in the La Cite project won’t help to create a meaningful concentration and focus.

At the community meeting this week Plank’s plans for the 17,000 market were well received. The architect for the renovation is Ana Castro of JRS Architects, the firm which also designed the Western District police station re-make.
Construction is scheduled to begin this fall and last about a year. Potentially the head house area could be used as “swing space” for some existing merchants says Jim Mills.

This article was originally published on Community Architect Daily on April 13, 2018. See it in its original post here. 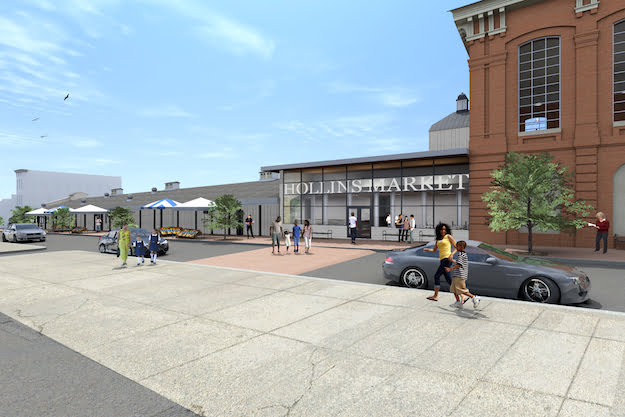