The 101,318-square-foot market and the building next to it with office space and a Lynn Brick’s gym is being listed by brokerage Marcus & Millichap.

Plank’s War Horse Cities LLC acquired the development in 2013 and underwent an extensive renovation that changed its facade and upgraded the infrastructure to resemble a West Coast open air market.

The re-do added a large neon sign to the front and outdoor seating. New vendors were signed who included a small-batch chocolate maker, fermented foods producer and a juice maker/produce stand that gave the market a new cache and vibe.

Plank’s conversion of Belvedere Square was hailed as a success and served as a model for a launch to redevelop several public markets across the city. He was initially involved in two of those efforts over the past four years: The redevelopment of Cross Street Market and Hollins Market. Both are now underway by other developers and the city.

“I’m trying to make exciting and fun urban markets that are environmentally and economically sustainable,” Plank said in a December 2014 interview with the Baltimore Business Journal.

Plank could not be reached for comment on the sale of Belvedere Square on Thursday.

The shopping and dining portion of the complex off York Road and Belvedere Avenue has had several owners since it first opened in the 1980s. It also ebbed and flowed with vendors and business leases.

Belvedere Square shuttered in the early 1990s and remained a vacant eyesore for years before reopening in 2003 after Struever Bros. Eccles & Rouse and Manekin LLC redeveloped it with a $2 million tax increment financing package from the city.

Today Belvedere Square serves as a popular gathering spot with an estimated 10,000 visitors a week, the War Horse website said. A series of Friday night concerts in the spring and summer has been a popular addition.

This article was originally published in the Baltimore Business Journal on April 18, 2019. See it in its original post here. 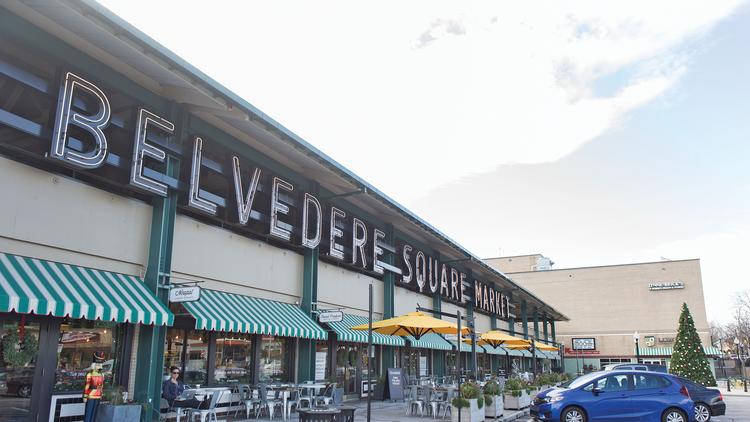